So you happen to be flying around the traffic pattern and notice a glint of light coming from the control tower that catches your eye.  Yes, it’s a light gun signal.  There’s only one reason why they would be aiming a light gun signal at your airplane….they tried to call you multiple times on the radio and got no response….

Is my radio broke?

So at this point there are a couple different possibilities.  One is that you simply missed the radio calls and did not hear the tower trying to contact you (this is easy and embarrassing to fix, simply answer them on the radio).  Other possibilities are your headset has come unplugged, that passenger that kept touching things they shouldn’t be somehow turned down the volume on the radio, maybe your headset has broken (probably just the earphones have broken and the mic still works, its rare for the entire thing to fail at once), it could be that the radio has failed in some way (battery on your airplane is failing, antenna has come disconected, etc.).

Well you could try and troubleshoot your radio, headset, maybe use your cellphone to try and call the tower directly, etc.  Or you could just go right to your kneeboard (or wherever you have the light gun signal chart written down somewhere accessible in the airplane) and comply with what the tower is telling you, fly the plane, and deal with the rest on the ground (I like option 2 of just fly the plane and land the plane better!).

How do I know what they’re trying to tell me? 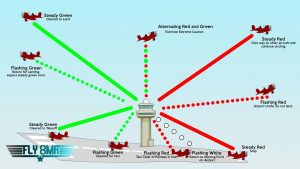 Well I don’t really expect anyone to know off the top of their head (especially in a stressful situation while flying an airplane) all of the exact meanings of all of the different light gun signals you could get.  In fact, most air traffic controllers will tell you they do not what they all mean off the top of their head either.  ATC simply has a small 3″x5″ diagram of what each signal means taped to the side of the light gun (basically a big handheld spotlight).  You should have the same thing affixed somewhere in your airplane (either to your kneeboard or maybe attached to the sun visor in the plane).  Having this handy makes life a lot easier when you are stressed and trying to remember some obscure piece of information you haven’t used since your private pilot checkride.

In the end, simply remember to fly the plane.  And for when things do go a little wrong in the communications department, having a light gun signal diagram permanently affixed somewhere easily accessible will make life a lot easier for you!