After a fun weather delay, we are on our way! 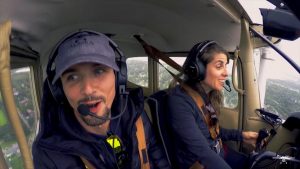 Jon and I are so excited to be flying again! We spent three days in the hangar working on Little Delta and then two days waiting for the fog to lift over Portage pass through Whittier so we could start making our way east. Fresh out of the annual, our trusty 170 is soaring through the skies of Anchorage, fully loaded with fuel and gear, for the adventure that is to last several months!

It was a slow start to the trip, trying to gather all the supplies while still in the city so we could be prepared as can be to be out remote for days. It was getting late in the day, the fog was stationary over the pass, but there was a rainbow over lake hood. We took this as a good omen that we should at least “go take a look” as we often have to do in Alaskan aviation. 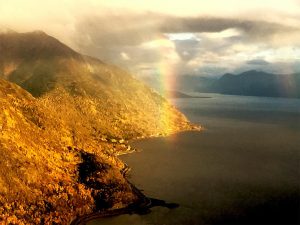 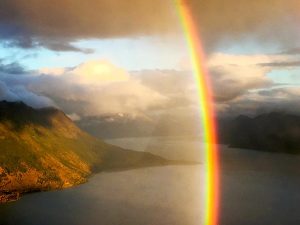 We got all the cameras mounted up on the wing, horizontal, tailwheel, wing strut and any other nook and cranny where we could fit a mount. The effort was well worth it for the views to come.  We got to fly through a perfectly round circle rainbow, a sight neither of us had ever experienced, a natural phenomenon I didn’t even know was possible. 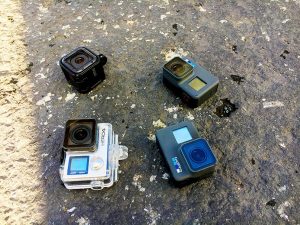 Sure enough, we found a nice blue hole up high in the sky and decided to go for it, after all, we could always turn back or file IFR below icing levels. Portage pass never opened for us, but at 9.5k feet we were able to climb over the clouds and make a little headway to the east following the shoreline. It was dark by the time we got to Valdez, and weather was definitely marginal, but we made it safely and the trip has officially begun!