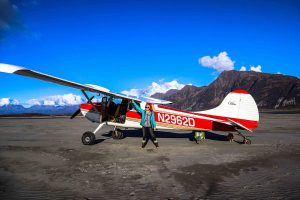 On our journey from Valdez to Cordova, a special surprise was awaiting us– a new place to land! Because the weather was so favorable, Jon suggested we fly through the mountains following the Copper River. Having never been on that route before, I eagerly agreed! We passed glacier after beautiful glacier and watched the road from Valdez disappear into the valley toward the north, as we made our way southbound to yet another charming Alaskan town off the road system. 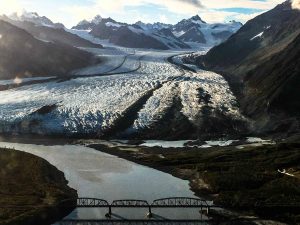 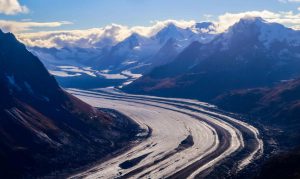 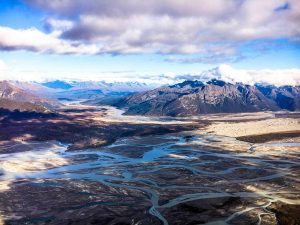 of glaciers and followed the astonishing delta of one of the biggest rivers in Alaska. Originally named by the natives for being rich in copper deposits, it is now praised as the source of one of the largest salmon fisheries in the state. For us, it was a new route filled with amazing sights only seen by the lucky ones that get to travel by air. Then, after some low level flying over the Miles Glacier and Lake, we couldn’t resist the temptation to just lightly touch the wheels on one of the sand bars, which of course turned into one of my famous “touch and stays” rather than touch and goes… 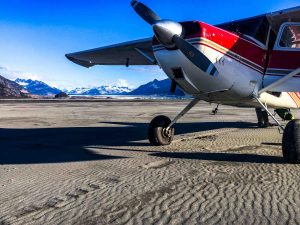 The experience of laying first tracks in a place is slightly surreal, there is nothing quite like it for me in aviation. We played in our little sand box, Jon of course had to fly the drone around, and Sia rolled around making doggie tracks of her own. Then onward to Cordova, a quaint little town of about 2500 inhabitants.

Another place named by a Spanish explorer, Cordova was originally a copper town at the beginning of the 1900s, connected to Valdez via railroad. Fish processing plants were also a part of the economy from the beginning, and as the copper industry subsided, commercial fishing became the primary industry, which is so to this day. 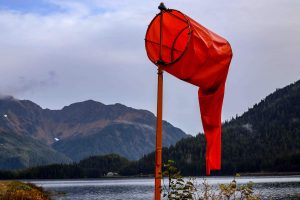 We arrived in Cordova with maybe an hour to spare before dark, and decided to stay the night rather than push on to Yakutat. I wish I had more pictures of the town itself, but unfortunately I had a terrible migrane that night that rendered me useless… It was a great place to get some very overpriced avgas and Jon got us a  comfortable spot to lay our heads. Even though they were calling for horrible weather the next day, we got lucky for the first part of the day and were able to continue on our journey eastbound and beyond…