No evidence of human life for hundreds of miles…. 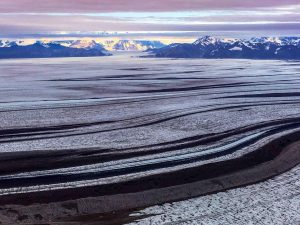 …Was the feeling we got on the day we flew from Cordova to Sitka. Just barren, desolate landscape with the occasional remote lodge or onshore shipwreck. What did surround us on this long journey were a myriad of glaciers, mountains, beaches and an endless horizon of ocean flying over the Gulf of Alaska.

The Malaspina Glacier is the largest piedmont glacier in the world, and an amazing sight when flying at FL 020. This type of glacier spills out into relatively flat ground and spreads into a bulb like shape. Named after an Italian explorer, this glacier spans 40 miles wide and 28 miles long, covering over 1500 square miles.

Covering such a vast area in just one day meant lots of hours of sitting in the airplane. Luckily Jon and I can be chatterboxes and certainly keep each other entertained in situations like this. The views out the window also helped the trip go relatively quickly until we reached Yakutat for our next fuel stop. The leg from Cordova to Yakutat blessed us with amazing weather– light winds and high(ish) ceilings. But it was short lived… In the six times I have made this trip along the shoreline, Cape Spencer has consistently proven to be a challenge. The weather is never predictable, a micro climate constantly changing in a matter of minutes (typically not for the better). It doesn’t help that you feel like you’re hundreds of miles from civilization over a rocky un-landable shoreline. We arrived in Sitka in the dark (again) in less than favorable marginal conditions. But with our powers combines we made it safely. 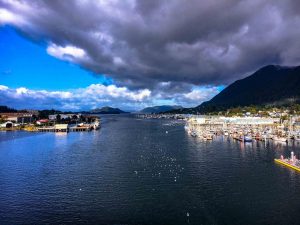 Sitka is a very beautiful, quaint town on the Baranof Island, the name is native for “people on the outside of Baranof Island.” It was settled by Russians in 1799, but had to face ferocious opposition from the Tlingit tribe. After years of conflict, the Russians prevailed and established the capital of Russian America and a central location for the Russian Orthodox bishop of Kamchatka. Luckily for us, Russia got into economic and political turmoil and decided to sell this seemingly useless land just a few years later. In 1867, Sitka was the location for the ceremony of the Alaska purchase, where the US bought this territory for 7.2 million.

Jon got us a very unique place to stay on an old WWII tug boat renovated and converted to an airbnb. We slept in a tiny asymmetrical room toward the stern where we were rocked all night long in the gentle waves of Port Valdez. Those gentle waves became white caps and wind was blowing through the windows that next morning, even though our aviation forecast had reported winds below 3kts. Go figure 😉 Little Delta was once again patiently waiting for us in the windy Sitka airport.