In this topic we’ll talk about two different ways to avoid risk.  The first is using the risk assessment matrix as described in the video above.  The second is avoiding hazardous attitudes and being able to recognize and remedy them when they appear!

The video above does a good job explaining the matrix and giving a few examples of how you could apply scenarios to the matrix itself.  It’s important to note that just about any activity can be measured on this matrix, and of course, even the safest flying involves some degree of risk.  Your job as the pilot in command is to mitigate that risk and to ensure you do not take unnecessary risks or take risks that are above your skill level.

We all experience some degree of hazardous attitudes in our everyday life, from road rage to pushing the limits on something and having it bite you directly in the butt.  As pilots we are probably more susceptible to hazardous attitudes than most in the general population due to the fact most of us are type A, get it done, aggressive, and successful people in other aspects of our lives.  This is fine since it is what enables most of us to successfully complete flight training both financially, and mentally.  However, there really is absolutely no room in aviation for these same attitudes and personalities that got us all the way here.  Almost every accident in the history of aviation will contain one or more of these attitudes with the people involved at that time.

The most notable example of this is the Tenerife disaster with two 747’s that collided on the runway due to a number of factors, but most notable the Captain of one aircraft clearly ignoring the First Officer’s remarks that they were not clear for takeoff and the Captain electing to proceed anyway.  684 people were on board both airplanes.  In just a few seconds, 583 of them perished, with the 61 survivors all sustaining severe injuries.  When reviewing the CVR tapes, it is abundantly clear the Captain of KLM 4805 was exhibiting 4 of the 5 hazardous attitudes.  Had he remedied even just one of them (or preferably all four), there is a very good chance 684 people would have arrived at there destinations safely and maybe with just a 1-2 minute delay.  His insistence to save just a few minutes (largely coupled with fatigue) led to hazardous attitudes that created the worst aviation disaster in history to this day.

Let’s take a look at the Five categories of hazardous attitude the FAA has defined and their recommendations on remedying them (note: you should be familiar with these and able to discuss them on your checkride and written exam). 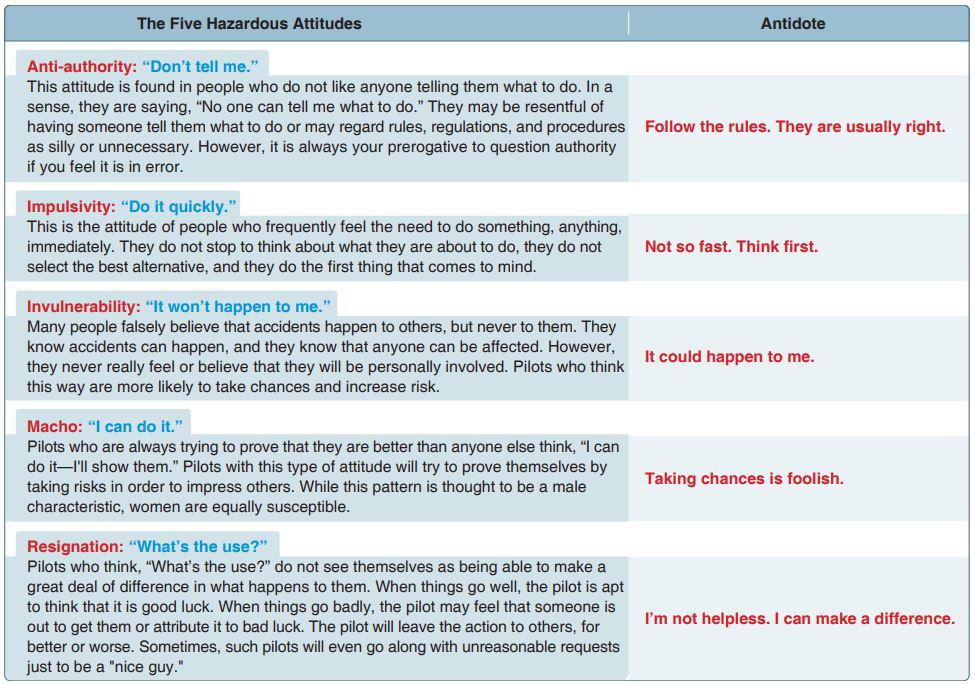