There are lots of different lights out there to help you find your way at night and in low visibility.  In this TOPIC we’ll cover;

Runways fall into one of three categories:

The category they are in dictates what types of markings you will find.

Runways have lots of markings on them, and it’s not just by coincidence.  Although these painted lines don’t light up, they are very helpful at night and in low visibility conditions.  First off, what type of markings can we expect on which runways?

Now let’s take a look at the examples below: 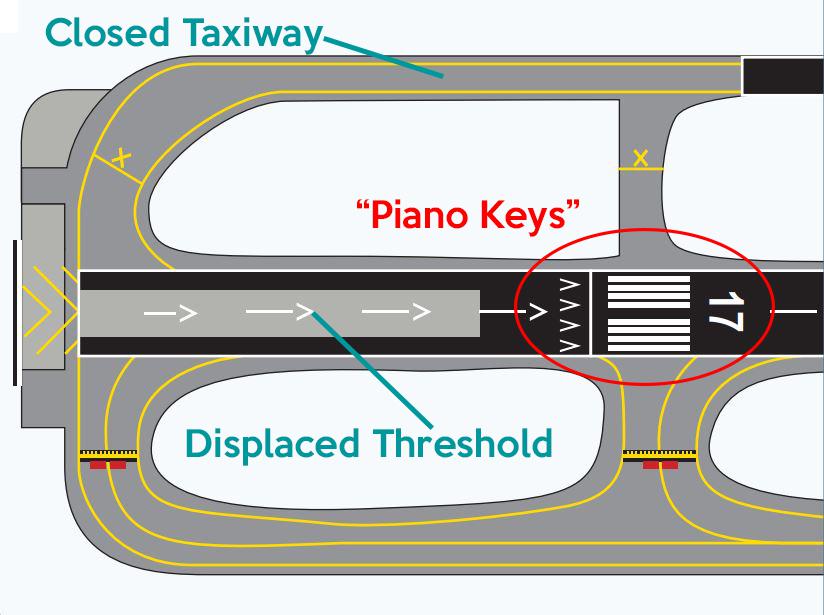 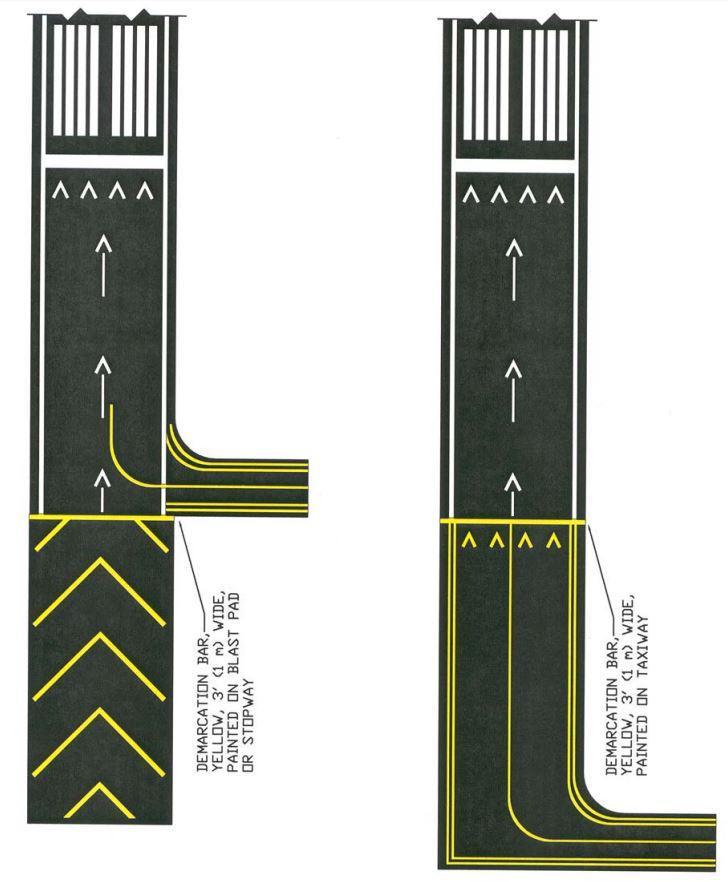 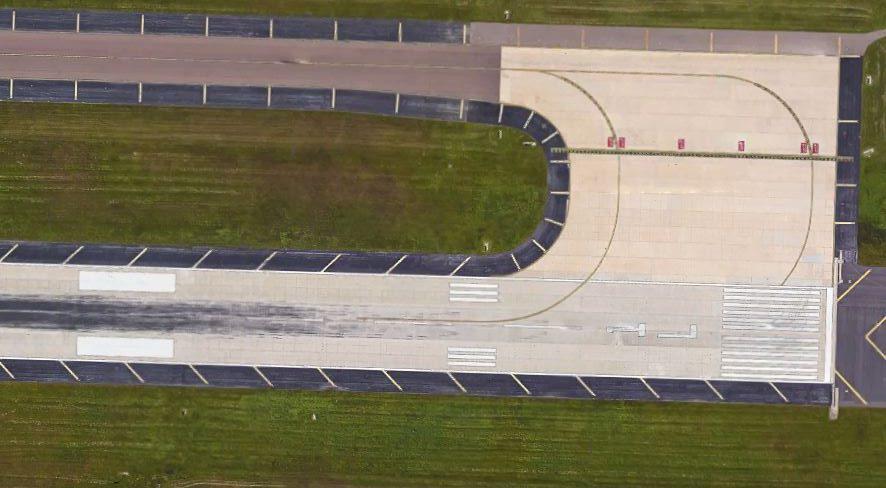 This one should be obvious, it’s the big white stripes in the middle of the runway.  However, there’s more than meets the eye.  The FAA has standardized how these stripes are painted and what they mean to you.

Runway centerline stripes are a minimum width of:

They are painted 120 feet long, with 80′ gaps between them.  If you are an instrument pilot and trying to gauge what 1/2sm (or 2400 rvr) looks like, you should be able to see 12 stripes down the runway.

The aiming point on the runway (any runway) is your best friend when making a nice smooth stable approach.  Whether you are a VFR or IFR pilot, seeing the aiming point in your windscreen gives you valuable information to tell if you are descending too steep or too shallow.  The aiming point is designated by the FAA to be painted 150′ long on runways 4,200′ or longer or 100′ long on shorter runways.  The width also varies with the width of the runway.

Notice how the PAPIs are installed to the left of the runway just past the Aiming Point (the aiming point is often referred to as the “thousand foot makers”).  Some say the PAPIs being located further down the runway would incorrectly make a pilot land just beyond the aiming point.  This may be the case for a glider pilot sitting very close to the ground, but a pilot of a larger airplane (especially larger jets where precision really matters) must have their wheels touch the runway right in between the two Aiming Point stripes.

The touchdown zone of the runway is where you should be able to get your aircraft onto the ground!  We always say as a rule of thumb that if you don’t land on the first third of the runway, then just go around, and that is a good rule of thumb. Of course, the actual performance data on your aircraft will dictate whether that rule works for you or not on that particular runway.  Touchdown zone markings consist of either one, two, or three parallel lines painted 75′ long on the runway with 425′ in between the markings (500′ segments).  Notice how the marking in the first 1,000′ of the runway has three lines, then goes to two lines for the 2nd 1,000′ of the runway, then one line on either side.  You may also notice how there is not a marking 500′ after the first marking with three lines.  This is because it would be too close to the aiming point and easy to confuse with the aiming point.  If the touchdown zone marking would be within 160′ of the aiming point it will not be painted.

The touchdown zone can be up to 3,000′ long.  There should always be at least a 1,800′ gap between the touchdown zone markings on either end of the runway (so you don’t get confused looking at markings that are meant to be there if you were landing from the other direction).  Shorter runways will have shorter touchdown zones.

Taxiway lights are blue.  They often can be adjusted in intensity the same as all lighting on the airport, with 3 radio clicks for low, 5 for medium, and 7 for high.

Taxiway centerline lighting is typically only at larger airports.  The center line lights are embedded in the pavement and are green.

The red lights above are telling us to not enter the runway, when they go away we can expect a clearance from ATC to cross.  The lights are not a clearance in any way, and the absence of the lights does not mean it is okay to cross a runway.  These lights are just there as an added safety measure, and typically only larger airports have them.  If you are cleared to cross a runway yet you see the red entrance lights illuminated, I would stop and query ATC to double and triple check you are in fact cleared to cross the runway.

Runway Center Line Lighting TRIVIA: Spaced at 50′ intervals. Installed within 2.5′ of the actual centerline.  The last 3,000′ of centerline lighting is alternating red and white to warn you of the end of the runway approaching, and the last 1,000′ is all red lights.  See diagram below: 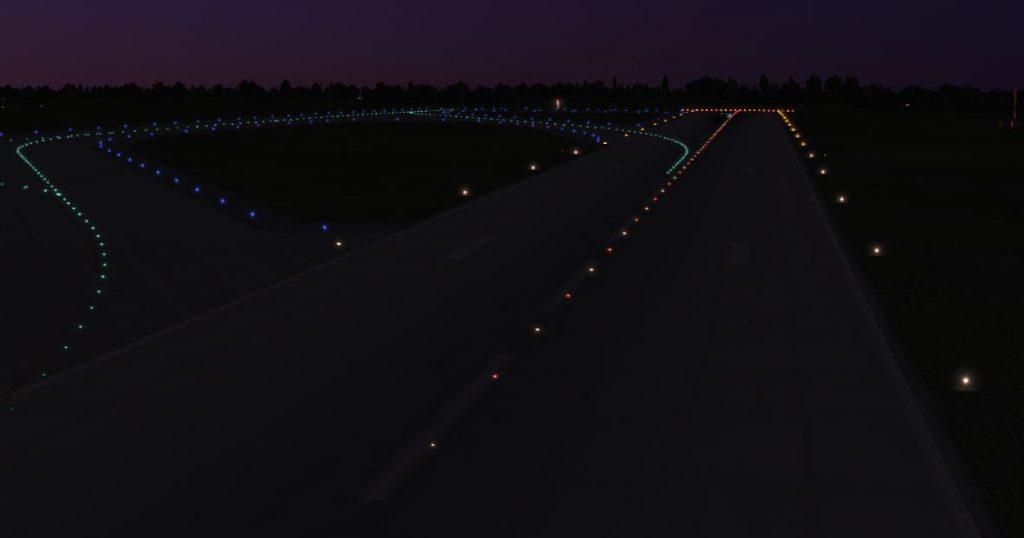 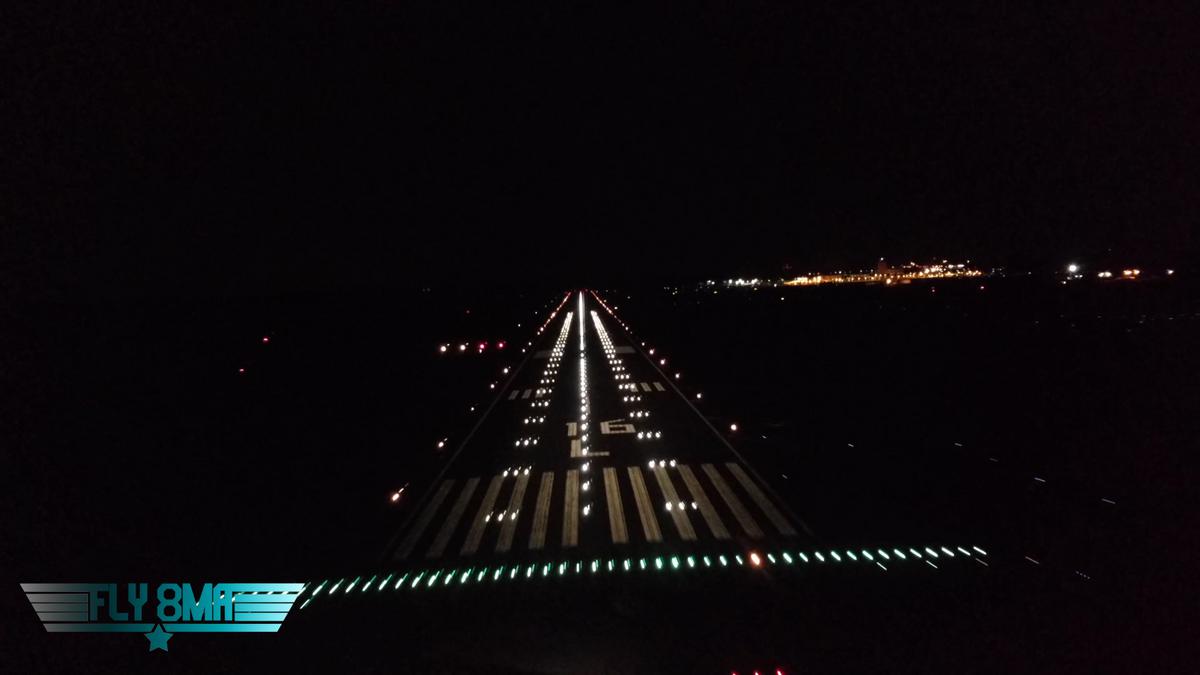 The lights on the edge of the runway are all white, with the exception of the last 2,000′ or half of the runway (whichever is less).  The last 2,000′ is amber or yellow (depends who you talk to, yellow is the correct color).  They are typically spaced at 200′ intervals.

You can see the change in color below:

The lights at a runway threshold shine green in the direction of landing and red to denote the end of the runway.  See the two photos below.

This is the fun part!  When you have the power of God in your hand and can turn night to day!  Well, not really, but it is pretty neat when you can control every light bulb on the airport with the push of a button in your airplane.  When the tower is closed or the airport you are at does not have a tower, but does have Pilot Controlled Lighting, you can select the lights and their intensity.  Typically once you turn the lights on they will stay on for 15 minutes and then turn off automatically (remember to click the lights often if you are staying in the pattern doing touch and go’s so they don’t go out when you are about to land!).

To select the lights on, you just click your push to talk button that you normally transmit with:

The clicks should be slow enough for the automated switch to “hear” them.  You have 5 seconds to make the clicks so take your time.  Here is a list of exactly what you are controlling when you click for low, medium, or high: 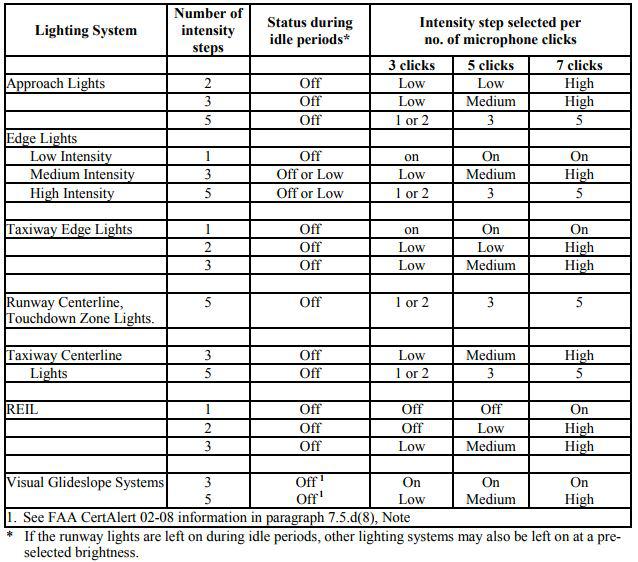 Depending on the type of runway (visual, precision, non-precision), there will be different types of approach lighting systems, or in other words, lights that help you find and line up with the runway.

The most common ones you will find are: 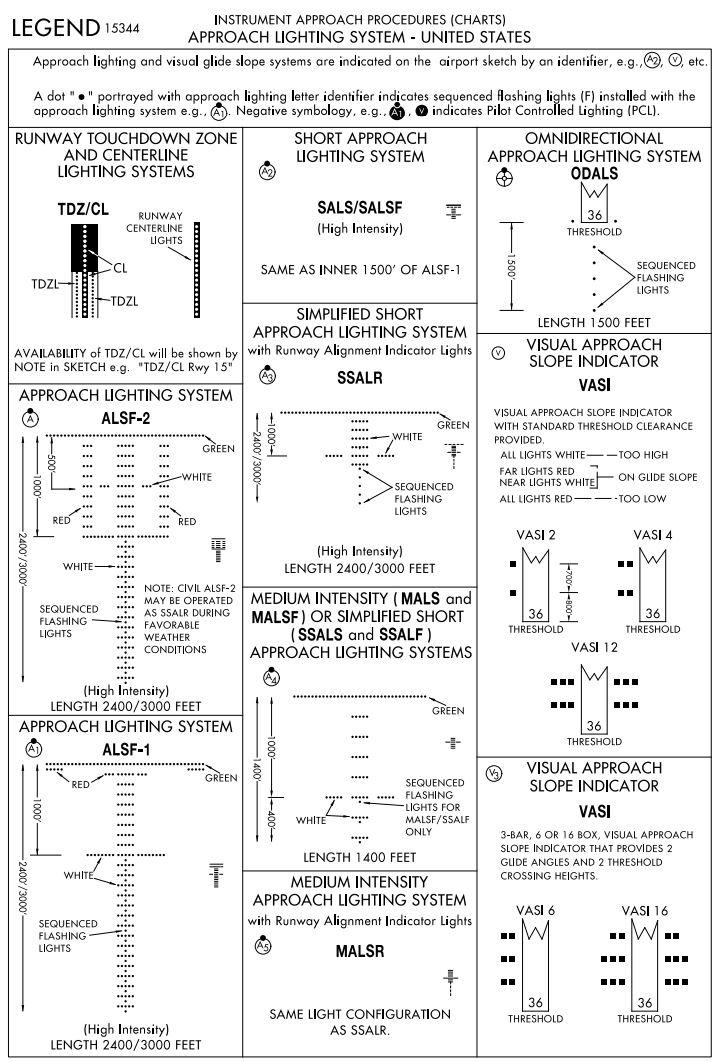 Like we talked about in previous lessons, sectional charts and the Chart Supplement both indicate if the airport has a “Rotating Beacon”.

Airport Beacons come in a variety of colors to help you know what type of airport it is:

Here’s an example of what a Lighted Land Airport looks like (green and white) from across the field.  (You will often be able to see the airport beacon before you see the actual airport at night.)  Typically I can see most Beacons 10-20 miles out depending on altitude and their configuration.