Spatial disorientation results from the brain not properly interpreting the signals it is receiving from the rest of the body.  Remember, flying is not natural for humans, this is partly what makes it so great!

The body uses three integrated systems that work together to ascertain orientation and movement in space.

Typically the eyes will overcome the false signals that the other systems send to our brains.  Why this happens is because we are meant to walk on flat ground, not drive, fly, or move by other methods other than our own two legs.  Our brains are wired for walking and running, not flying.  This is why we have instruments so we can use mind over matter and actually judge what is really happening with our aircraft when visual cues are removed, such as at night, in IMC (or low vis), or when there is not an obvious horizon (like flying over a large lake or body of water during the day, the blue sky blends into the blue water).

Knowing that our ear controls our balance, we need to be careful not to send it even more information than it already is taking in while we are flying.

The best solution here is prevention.  Do not make sudden head movements and rely on your instruments when there are no outside visual references (or bad outside visual references, like a false horizon which we’ll talk about here soon).  It also helps when you know what sensations you can expect that might be misleading.  We’ll talk about some of those misleading sensations below…

A condition called the leans, is the most common illusion during flight and is caused by a sudden return to level flight following a gradual and prolonged turn that went unnoticed by the pilot. The reason a pilot can be unaware of such a gradual turn is that human exposure to a rotational acceleration of 2 degrees per second or lower is below the detection threshold of the semicircular canals (see below).  Leveling the wings after such a turn may cause an illusion that the aircraft is banking in the opposite direction. In response to such an illusion, a pilot may lean in the direction of the original turn in a corrective attempt to regain the perception of a correct vertical posture.

The “coriolis illusion” occurs when a pilot has been in a turn long enough for the fluid in the ear canal to move at the same speed as the canal. A movement of the head in a different plane (quick turning to look at something else) may set the fluid moving, creating the illusion of turning or accelerating on an entirely different axis. This action causes the pilot to think the aircraft is banking, yawing, or pitching when it is not. It is common for a disoriented pilot in this case to put the aircraft into a dangerous attitude as they “try to correct” what they believe is a different attitude than the aircraft is really in.  USE MINIMUM HEAD MOVEMENTS WHEN CROSS SCANNING INSTRUMENTS!

As in other illusions, a pilot in a prolonged coordinated, constant-rate turn may experience the illusion of actually not turning. During the recovery to level flight, the pilot will then experience the sensation of turning in the opposite direction causing them to return the aircraft to its original turn. Because an aircraft tends to lose altitude in turns unless the pilot compensates for the loss in lift, the pilot may notice a loss of altitude. The absence of any sensation of turning creates the illusion of being in a level descent. The pilot may pull back on the controls in an attempt to climb or stop the descent. This action tightens the spiral and increases the loss of altitude; this illusion is referred to as a “graveyard spiral.” (see below).  This typically does not end well unless the pilot reverts back to unusual attitude training and relies on the instruments to level the wings and return the aircraft to level. 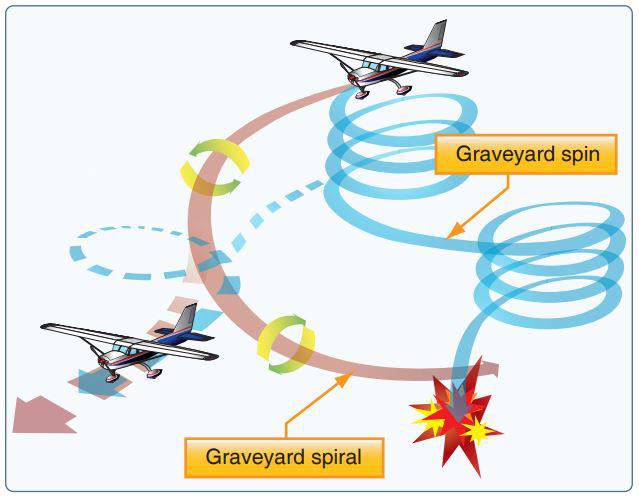 A rapid acceleration, such as experienced during takeoff, stimulates the otolith organs in the same way as tilting the head backward. This action may create what is known as the “somatogravic illusion” of being in a nose-up attitude, especially in conditions with poor visual references. The disoriented pilot may push the aircraft into a nose-low or dive attitude. Typically accelerating will produce a feeling of being nose up and decelerating gives a feeling of being nose down.  This is bad for obvious reasons if you try to “correct” the imaginary nose high or nose low attitude when the aircraft is already level.

An abrupt change from climb to straight-and-level flight can stimulate the otolith organs enough to create the illusion of tumbling backward, known as “inversion illusion.” The disoriented pilot may push the aircraft abruptly into a noselow attitude, which may intensify this illusion.

An abrupt upward vertical acceleration, as can occur in an updraft, can stimulate the otolith organs to create the illusion of being in a climb. This is known as “elevator illusion.” The disoriented pilot may push the aircraft into a nose-low attitude. An abrupt downward vertical acceleration, usually in a downdraft, has the opposite effect with the disoriented pilot pulling the aircraft into a nose-up attitude.

Posture certainly plays a part in spatial disorientation.  Be aware of your posture and recognize that multiple different maneuvers provide the same “postural feedback”.  This is again why you must rely on your instruments as that is the only way to be sure of the attitude of the aircraft! 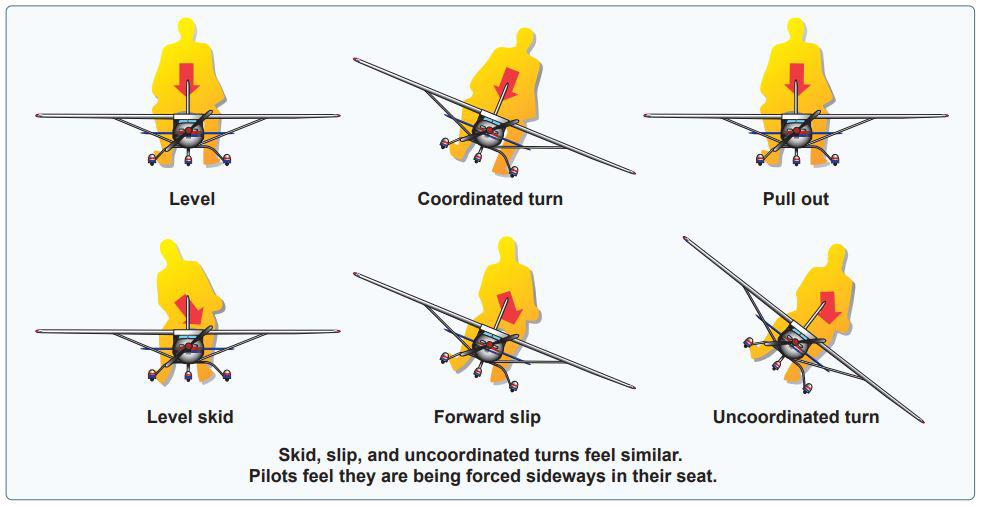 The width, as well as the slope of the runway, can play tricks on your eyes and make you fly an unsafe approach slope down to the runway.

The best way to overcome this is to use visual aids like PAPIs and VASIs to guide you down to the runway and to not descend below the glide path indicated by the lights until it is absolutely necessary.  The FAA has made a very good effort in giving money to local airports to install things like PAPIs to help pilots fly safe stabilized approaches down to the runway.  If your airport has not yet been able to install one of these approach path indicators or you are landing at an airport without one, here is a little math that can help ensure you are flying a safe approach: 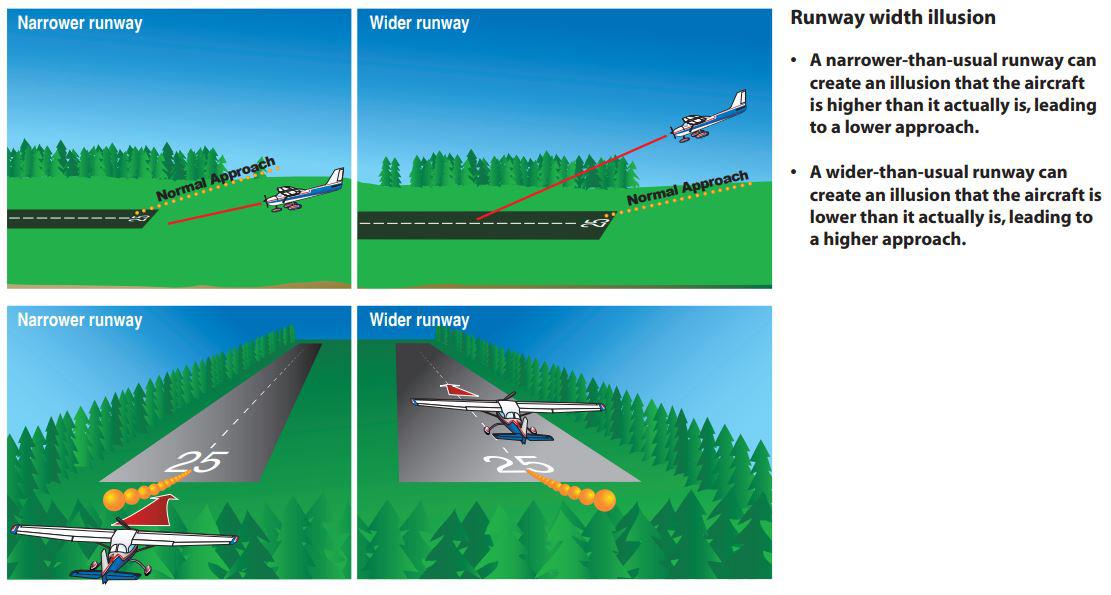 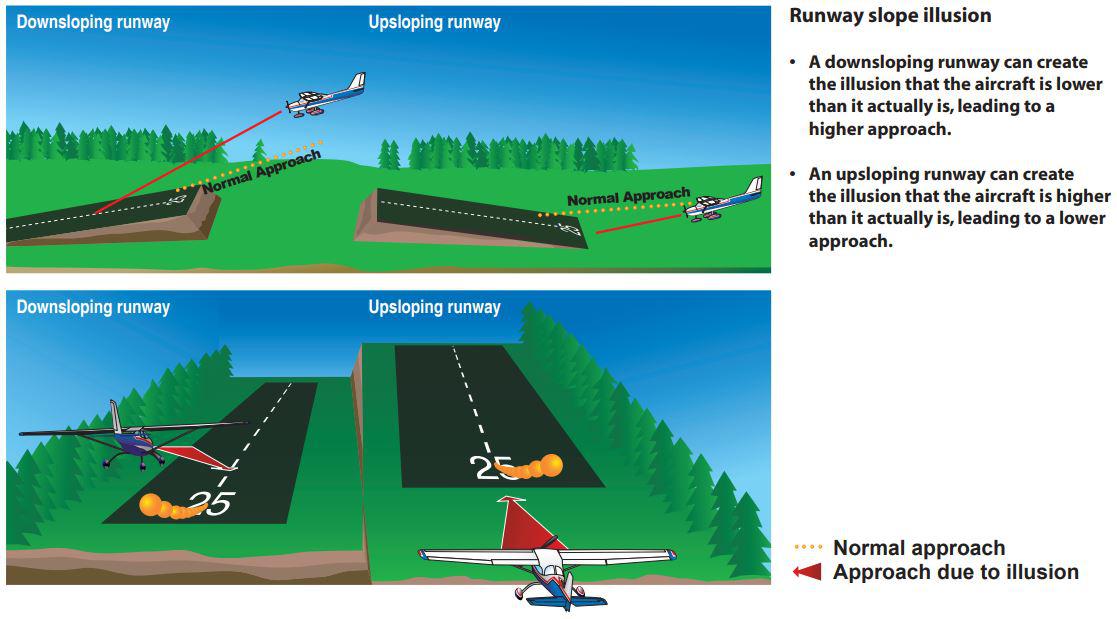 Runway slope, width, and length information can all be found in the CHART SUPPLEMENT.

A sloping cloud formation, an obscured horizon, an aurora borealis, a dark scene spread with ground lights and stars, and certain geometric patterns of ground lights can provide inaccurate visual information, or “false horizon,” when attempting to align the aircraft with the actual horizon. The disoriented pilots, as a result, may place the aircraft in a dangerous attitude.  It is common when flying over dark terrain with city lights in the distance at a slight angle to the aircraft will make you want to align the aircraft off of the “slanted” lights, inadvertently placing yourself in a banked turn.

An absence of surrounding ground features, as in an overwater approach over darkened areas or terrain made featureless by snow, can create an illusion that the aircraft is at a higher altitude than it actually is. This illusion sometimes referred to as the “black hole approach,” causes pilots to fly a lower approach than is desired.

Rain on the windscreen can create an illusion of being at a higher altitude due to the horizon appearing lower than it is. This can result in the pilot flying a lower approach.

Flying through haze can create an illusion of being at a greater distance and height from the runway. As a result, you will have a tendency to be low on the approach. Conversely, extremely clear air (clear bright conditions of a high altitude airport) can give the pilot the illusion of being closer than he or she actually is, resulting in a high approach that may result in an overshoot or go around.

Flying into fog can create an illusion of pitching up. Pilots who do not recognize this illusion often steepen the approach abruptly.

When flying in the dark, a stationary light may appear to move if it is stared at for a prolonged period of time. As a result, a pilot may attempt to align the aircraft with the perceived moving light potentially causing him/her to lose control of the aircraft. This illusion is known as “autokinesis.

Now that sounds like a ton of complex information to remember all off the top of your head.  In reality, pilots at different levels need to be able to remember all of these different scenarios, yet during a checkride the examiner is going to expect varying levels of knowledge depending on what certificate you are applying for.  Here is a rough guide of how much you should remember from above for the checkride (in the real world, try to apply all of the knowledge above when planning flights and going out there flying!):

If you want your instructor to demonstrate some of these illusions to you while under the hood, see PHAK 17-8 and schedule a day VFR flight lesson with them.