How to turn the Airplane:

While making turns in the airplane may seem simple, making coordinated, level turns and rolling out specifically where you want the aircraft to point does take some skill and practice.  In this topic we’ll cover the fundamentals of being able to turn the airplane to a specific heading while also maintaining your altitude.

What’s happening in the turn

When an airplane is turning, it is really just making a “curved” flight path through the sky.  With this in mind, let’s talk about the first characteristic of turning an airplane.

Most training airplanes when banked slightly will want to go back to level flight.  This is because they are DYNAMICALLY STABLE.  This stability to right themselves does not come from the airplane being a high wing or low wing airplane, but rather the DIHEDRAL built into the wings (dihedral is a topic we will cover much more in-depth at the commercial pilot level, don’t worry too much about it for now).

This stability means you will have to make a deliberate motion with the ailerons to overcome it, and be able to bank the airplane.  This use of ailerons will in-turn cause ADVERSE YAW, which will require you to use some rudder to overcome and keep the “ball” in the center.  The “adverse yaw” is just a way of saying the airplane yaws in the direction you don’t really want it to.  For example, when you begin a left turn, using the ailerons to bank the airplane to the left will initially cause the airplane to yaw right before the nose begins to come around in the direction of the turn. 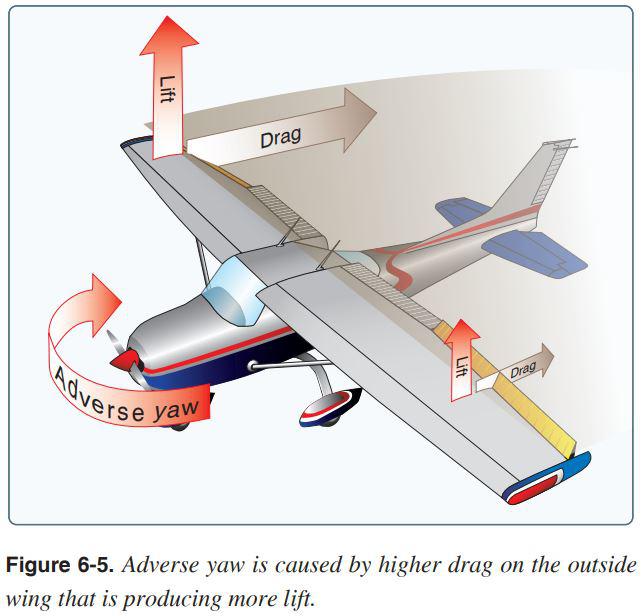 Our next factor in the turn is Over Banking Tendency:

This is the tendency for the airplane at a certain degree of bank, to want to bank even more rather than go back to wings level like a nice stable airplane should.  Every airplane has this “over-banking tendency” at certain degrees of bank, due to the airplane being in a curving flight path, and one wing is ultimately moving faster than the other.  When you have more airflow over the outside wing than the inside wing, the airplane will want to increase its angle of bank rather than return to wings level.  It is simple to counter this in flight with just a little pressure on the ailerons. 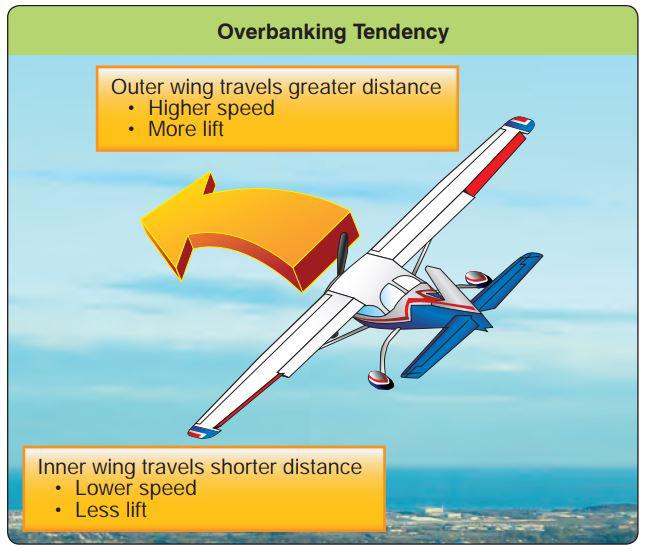 There are two things that affect the “rate of turn” or how fast the aircraft changes its heading.

Think of a car on the interstate, you need a nice wide radius curve in the road to turn at highway speeds, but in a parking lot you can make much tighter turns at lower speeds.  The same principle applies in the airplane.

To make a tight turn in the plane you will either have to increase the bank (equivalent of turning the wheel in a car harder) or slow the airplane down.  This is important to remember when practicing slow flight and also when flying in the traffic pattern.  Having the right amount of speed and bank is critical to the aircraft finishing the turn where you want it to, and not over or undershooting the final approach course to the runway.